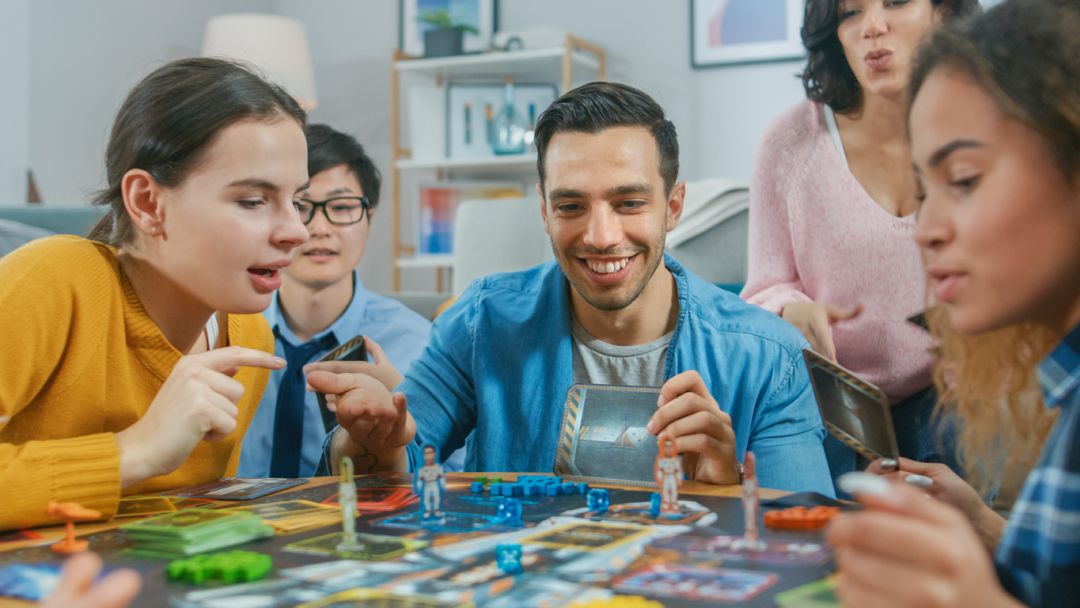 Playing Christian board games is a great way for families and Christian communities to spend time together. There are many varieties of board games, and everyone can enjoy them.

For example, DragonRaid is the original Lightraiders board game created in RPG format in the 1980s. The X-box style crossfire system found in many of today’s video games, where characters can use distance weapons to damage opponents but must take care to watch out for players on their own team, can be found in the 1980s DragonRaid rule set.

DragonRaid was an early front-runner in which Christian game developers used well established game development science to create a fun and engaging experience that also teaches.

New Christian Board Games for Your Family: Fun and discipleship

Today’s Christian board game community is expanding and creating great board games that everyone can enjoy.

Enthusiasts have put together Christian versions of classic board games and invented entirely new games. They encourage the development of biblical knowledge and foster a spirit of charity among players while providing the same fun gaming experience as their mainstream counterparts.

Christian family board games like those in the Lightraiders family of games teach important life lessons through play. Through play, players learn and apply discipleship principles like the Armor of God, the Fruit of the Spirit, and working together as part of the Body. When parents and kids participate in these types of Christian family board games together, they grow closer.

Gamer culture has been gaining strength since the early 2010s, with a growing number of Christian gamers included. From RPGs to card games to video games, Christian gamers face choices almost daily as they are presented with highly popular games that run contrary to a Christian worldview. This is a hard battle to fight for under funded and under supported Christian video game creators. But now, as a new wave of rejecting screens sweeps the culture, Christian board game creators can become the tip of the spear.

The field is small but growing. Deliverance the Christian Fantasy Board Game hit Kickstarter this year with a huge splash, covering the strategy/dungeon crawler format that is potentially the most popular style in the gaming community. Bible Brawl and First Watch followed shortly after in the card game category, with

Christian Board Games are often used as a way to show friends or children what Christians believe, giving them tools on how they should treat themselves and others if they are also Christians.

And besides being spiritually rewarding, Christian Board Games make great gifts for birthdays or Christmas.

Many churches set up large tables where Christian board gamers can gather during their free time and enjoy these fun board games with their friends.

One of the biggest issues facing Christian culture today is how to incorporate Christian values into everyday life, especially for children. Christian Board Games are a great way to explore Christian themes and ideas in a fun and lighthearted way.

LightRaiders has created a whole world around their unique take on Christianity, offering educational Christian Board Games at great prices across their entire product range.

Lightraiders Christian Board Games are one of the most popular Christian Board Games you can buy. They help boost children’s creativity and imagination, teach valuable faith lessons, encourage healthy social interaction and can be played with anyone, regardless of faith or background. Today’s children love technology, but at the same time they still want to play with physical toys and not just a screen. Christian Board Games provide an excellent opportunity to engage in both worlds at once, giving them faith-centered entertainment while also connecting with their family.

How Fun is Lightraiders? Fantasy Christian Board Games

Christian Board Games have begun to gain prominence in recent years. Christian Board Games strive to include Christian themes in games that are fun for the whole family Christian-themed board games are not only a way to serve Christ through family entertainment, but they are also one of the best ways to evangelize to your friends and neighbors.

Lightraiders is a board game in which you can play as one of four races: Human, Elf, Dwarf or Goblin The object of the game is for each player to make it from their home village to the Holy City located in the center of the map. Once all players reach the Sacred City, they win the game But beware… the deadly Plague Mask blocks most roads and spawns beastly creatures bent on destroying your troops.

Admit it, Christian Board Games aren’t that much fun. However, a Christian board game called Lightraiders looks to be quite fun!

Lightraiders is a board game that uses Christian characters and Christian values for players of all ages. This board game includes Christian figures, Christian cards, and other Christian elements. The themes of the game include dragons, medieval knights, etc. The concepts of this game are based on Christianity, so there should be no challenging or distracting factors for Christians while playing the board game.

Each player will take control of an Avatar – God’s creatures made in His image to rule.

The Fun of Christian Board Games

In fact, Christian Board Games are any type of Christian-themed board game. For example: instead of falling into “Go,” players can fall into “Matthew 16:26” (which says, “What does it profit a man to gain the whole world and lose his soul?”). Instead of buying property like in Monopoly, players could buy biblical concepts like forgiveness or covenant for their characters.

Christian Board Games take many forms, but all serve to bring Christians together in a fun way, apart from sports.