Wraith introduces readers to an exciting new fictional aviator, protagonist Michael “Victor” Baron (Nick Baron). Amidst the darkness of the 9/11 aftermath and the controversy of a fatal training accident, Victor leaves his A-10 Warthog squadron to join the Stealth Bomber, where he is certain he will have a better chance to gain retribution for the twin tower attacks. At the Stealth Wing, a covert operative recruits him into the top secret world of Operation Cerberus, an executive-directed mission to eliminate terrorist leaders. Cerberus takes Victor from a harrowing flight high over a hidden desert testing facility to a fight for his life on the Iraqi dunes.

Readers are challenged to solve a secret message about encoded into the book’s dedication. Hannibal used a 150-year old encryption technique to embed the code and then left clues in the novel’s text to help readers decipher it. Try breaking the code yourself!

“Hannibal demonstrates that high-tech weapons are only tools, and that it’s the people doing the fighting who win the day”. – Publishers Weekly 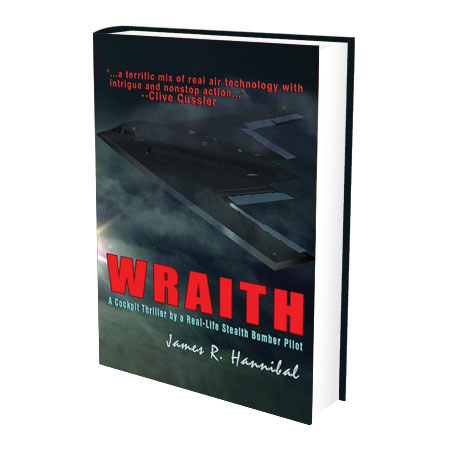 Be the first to review “Wraith Original Hardcover” Cancel reply