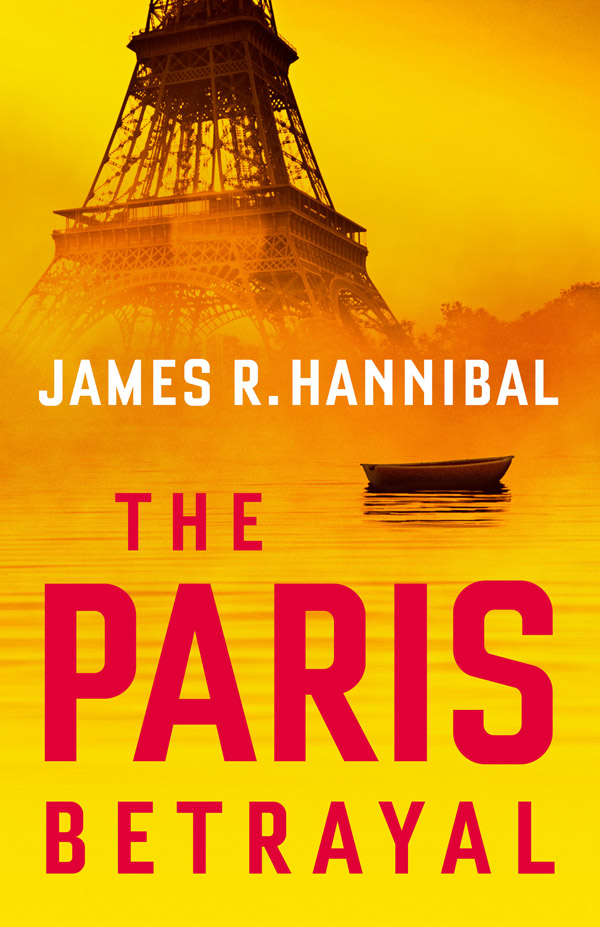 A Spy Cast into the Cold

After an intelligence operation in Rome goes sideways, Ben Calix returns to Paris to find his perfectly ordered world turned upside down. A hit man ambushes him at his flat. French SWAT tries to hem him in. This is a severance. The Director has kicked him out into the cold. But why?

To find answers, Ben must seek the sniper who tried to kill him, the spymaster who trained him, the doctor who once saved his life, and the teammate who killed the woman he loved. And in the midst of this search, scouring Europe for his contacts, he must still try to stop a world-altering attack.

We have a companion Bible study on the way for The Paris Betrayal created by our theological advisor and Holman Bible Dictionary contributor Dr. Gary C. Huckabay. Look for it in the summer of 2022. Check back here for updates, or sign up for the newsletter to get a direct notification when the Bible study becomes available. Trust us, Dr. Huckabay’s insights are well worth the wait.

“[Hannibal] uses a similar framework [to Robert Ludlum], but he builds his own house, and it’s quite an impressive one. A high voltage spy adventure that will please newcomers and veterans of the genre.”

“This is one book that is so filled with suspense, it feels like you’ve lived it, not read it. The final reveal is awesome, and the spark of romance that’s offered turns this high-powered spy story into one with multiple tiers of emotion. Every tension-filled page of this book is unforgettable.”

“Another gripping, high-octane book from one of the best thriller writers in the business. Hannibal sets his hook deep and early for a riveting, edge-of-your-seat story!”

“A masterful thriller created by a masterful writer. I devoured every page with the lights on!”

“Riveting and action-packed. The Paris Betrayal is everything you want in a thriller!” 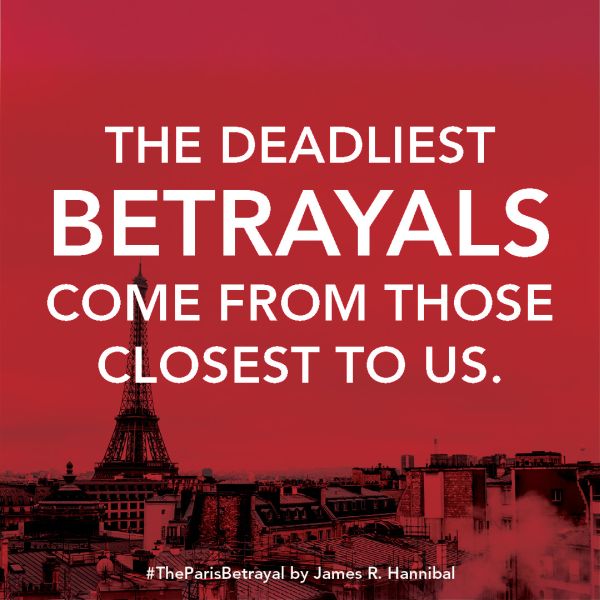 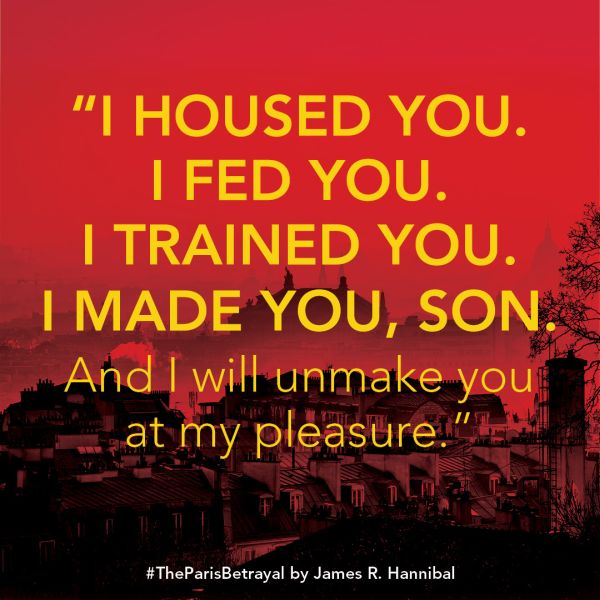 From a rooftop perch, Ben Calix watched the courier leave the Tiber and cross the piazza. He traced his scope from the man’s temple down to his forearm. No cuff secured his wrist to the steel briefcase. Foolish. Ben’s team had been tracking that case since Morocco. This morning, they’d claim their treasure.

“Micro, Saber has eyes on.”

Ben frowned in Dylan’s direction, his young Welsh hacker-slash-technician, out of sight and grumbling in the ancient sewer beneath Rome’s Piazza del Popolo. Smelly, but warmer than Ben’s post. The night’s frost still whitened the stone lip of the roof. He shivered, returning his eye to the scope. “Now is not the time, Micro.”

The first tourists of the day filtered out onto the streets—the early risers and the overzealous fathers dragging bleary-eyed kids. In this city, even in the dead of winter, an operative could always count on a crowd. Rome—the true neutral ground of the espionage world. The Swiss claim neutrality, but everyone knows they have an underlying conscience. Rome does not.

The Italians maintain a true laissez-faire approach. Americans, Russians, Iranians—everyone does their own thing with impunity. Bullets must fly in the open streets for the Italian cops to take an interest.

Ben dialed in the scope’s rangefinder. “Nightingale, he’s twenty meters out. You’re on.”

Giselle Laurent, a platinum blonde for this op and sporting faux fur, tipped her oversize sunglasses down the bridge of her nose. “I see him. Poor little man.” She set off from her post at the piazza’s sphynx fountain on a course to intercept.

“See,” Dylan said, jamming up the comms. “That’s what I’m talking about. The Company gave you Saber, like you’re the tip of the spear or something. Miss Tall, Questionably Blonde, and Gorgeous gets Nightingale. And what do I get? Micro. What are they implying?”

“They’re implying you’re short. Shut up. She’s almost there.” Ben wiggled a black box in his fingers, as if the kid could see it. “The thing you gave me. Do I need to point it like a TV remote?”

“You’re making my point. It’s not a TV remote or a gun. No need to point it at anything. The antenna is omnidirectional.”

“Uh. Sure. The antenna.” Ben turned the box over and found a black rubber nub buried in a hole in the top. He grabbed it with his teeth and pulled. “Got it.”

Down in the piazza, Giselle hit her target full on with a cappuccino. Ben winced at her squeal, piercing despite the comm link’s static. She bellowed at the target in French about fur coats and coffee stains, poking him in the chest. He backed away, expertly steered into a lamppost with a false utility box Dylan had placed there the night before. Trapped, the courier set his case down to fend off the crazy fur lady.

In the middle of her tirade, Giselle spoke the trigger word. “Mink.”

By the time the courier reached for his case again, Dylan’s contraption had swapped it with a duplicate—same make and weight, thanks to Giselle’s photos and Dylan’s calculations. A moment later, Ben heard the buzz of a motorbike in his earpiece—Dylan tearing away through the sewers with the prize. “Micro has the package. Contents look good. I’m off.”

Ben didn’t envy the courier, poked and swatted by Giselle before breakfast and destined for a pre-lunch beating once the buyer opened a case full of blank papers and empty steel tubes. But he’d brought the beating on himself with his sins. Ben and Giselle wouldn’t interfere. They’d need to watch the buyer to see what he did next, now that they’d messed with his world.

With the real case in hand and the buyer under surveillance, the Company would finally get a trace on the organization behind the destruction in Munich, St. Petersburg, and Tokyo. Each strike built upon the ferocity and death toll of the last until Rotterdam, when the bomber had botched his job and killed only himself.

Rotterdam was the break the Company needed. An undetonated fragment proved the attacks involved a new type of explosive—CRTX, five times as powerful as C4 and previously considered impossible to make. With the bomb compound identified, the Company field operatives went into overdrive searching for leads. Ben found the big one. An Algerian contact in his home base of Paris hinted at an order of rare chemicals heading to a bomb maker. Ben put a hasty mission together, pulling in Giselle and the Company’s top tinker—Dylan. The Algerian’s info led them to the case, and the case led them here.

A shadow darkened Ben’s perch. Strong arms flipped him over and slammed him down, breaking roof tiles.

“Massir?” The Algerian—the criminal from Paris whose rumor about an order of bomb-making chemicals led Ben to the case. Ben feigned relief and exasperation and rolled onto his shoulder, hiding his hand and his coat pocket. “Did you follow me?”

He didn’t give Massir a chance to answer. In a snap motion, Ben reversed his body and used the momentum to scissor the Algerian’s legs from beneath him. The SIG flew out of Massir’s hand. Scrambling over the tiles, Ben pinned him down, one knee on an arm and the other across his chest. His left hand brushed Massir’s side, leaving behind a gift.

Ben jerked his face back and caught the man’s wrist. He clamped a hand over the fingers, trapping the blade. “Bad idea.” A strike to the elbow bent Massir’s arm, and with both hands, Ben pressed the knife down until the tip found Massir’s Adam’s apple. “When we met in Paris, I was working under an alias. How do you know my real name?”

“Jupiter has been watching you. He is pleased.”

Screams hit Ben’s ears—two versions of the same scream, one live and one over the comm link. Giselle.

“Saber, this is Micro.” The echoing howl of a motorbike in a sewer pipe nearly drowned out Dylan’s voice. “Something’s wrong.”

“And do what?” Ben knocked Massir out with a right cross. “You never carry a gun.” He launched himself over the ledge and rode the fire escape down until it clanked against its stop, leaving him dangling five feet above the pavement. He dropped to the ground in a crouch. “Go, Dylan. Get out of here.”

Ben rose and turned. The crowd before him scattered, some running for their lives.

Fifty meters away, a red-haired man the size of a small house held Giselle by the neck, dragging her backward toward a runabout bobbing against the Tiber River docks.

Giselle’s attacker raised a SIG like Massir’s to her neck. “Stay back. I’ll kill her.”

Without slowing, Ben drew a Glock and leveled it. “Not a chance.”