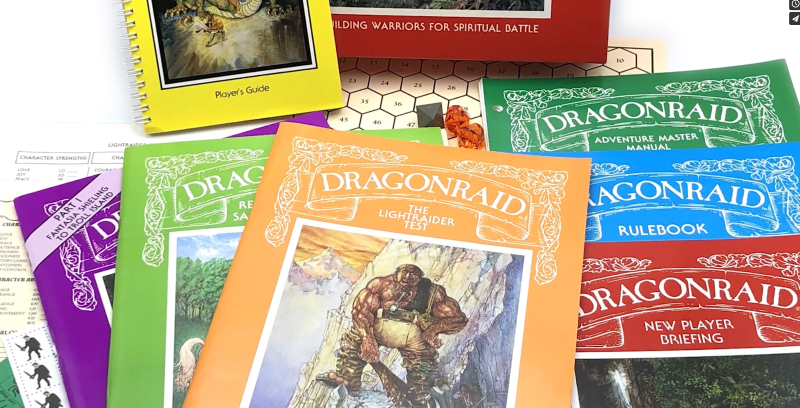 Remember the discipleship programs of your youth? We remember. And we sought out the Bible study system with the greatest impact on our lives, ready to carry it forward into the 21st Century.

DragonRaid is an “Adventure Learning System” created in 1984 by Christian counselor and NavPress author Dick Wulf for the purpose of discipling youth through an engaging fantasy adventure. It is a roleplaying game with a structure and style all its own that touched more than 100,000 lives in its time, including the life of Lightraiders game developer and Christian author James R. Hannibal.

The first two modules use a guided choose-your-adventure style to let players learn the game. Later modules (the Moonbridge Raid Parts One, Two, and Three) offer more flexibility with movement about a map overlaid with hexagon sectors. Students create a character to roleplay in the story, earning “maturity units” for correctly applying the Word. With these maturity units, they can upgrade their character. Dice-based rules introduce randomness and challenges. During each adventure, students encounter fantasy situations that let them apply memorized Bible verses for an allegorical result, engaging a different part of the brain to increase retention.

Thirty-five years after DragonRaid’s inception, James and the Lightraider Academy team are breathing new life into this powerful discipleship tool by creating the Lightraiders Adventure Bible Study system, expected to appear in 2022. The first step in moving toward that goal was the First Watch Scripture memory and application card deck, which recently launched and trended on Kickstarter.

What do we have available? Only a few hundred boxed sets with three original adventures remain. We put these together in our shop fresh out of each component’s 1980s printing press boxes, with new and updated components as needed. While these original boxed sets last, we will include The Moonbridge Raid Part One in each package. Plus, we have two brand new adventure module extensions (the Moonbridge Raids Parts Two and Three) to complete the Moonbridge Raid campaign. These are currently available as digital (printable) downloads.

The original DragonRaid is available now in our shop while supplies last.