Hebrews 11:30: By faith the walls of Jericho fell, after the army had marched around them for seven days.

Joshua was a man of great faith. A brave and brilliant warrior, the Old Testament describes his conquest of Canaan and other military exploits in detail. Even though Joshua spearheaded the great campaign that brought the Israelites into the Promised Land, his faith in God is his most outstanding characteristic.

Joshua’s skill as a warrior and leader were without question. In Exodus, Moses ordered Joshua to fight the Amalekites. Joshua took his men and they were victorious over their enemies. Even though Joshua undoubtedly led his fellow Israelites with courage, the Bible states Moses holding the Staff of God above his head was the catalyst for victory. It says in Exodus 17:12-13: When Moses’ hands grew tired, they took a stone and put it under him and he sat on it. Aaron and Hur held his hands up-one on one side, one on the other-so that his handsremained steady till sunset. So Joshua overcame the Amalekite army with the sword. Even though he was a mighty warrior, Joshua knew where his victories came from. He chose to rely on the Lord instead of his own martial prowess. 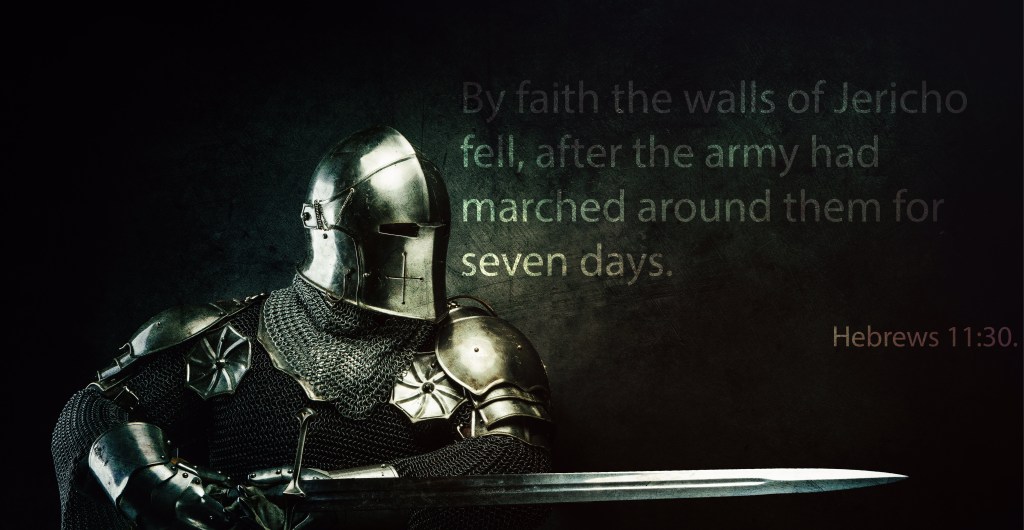 In the opening verse of this devotional, it references the Israelites’ victory over Jericho. The conquest of Jericho must have seemed silly to a man of action like Joshua. It says in Exodus 6:1-5: Now Jericho was strongly fortified because of the Israelites—no one leaving or entering. 2 The Lord said to Joshua, “Look, I have handed Jericho, its king, and its fighting men over to you. 3 March around the city with all the men of war, circling the city one time. Do this for six days. 4 Have seven priests carry seven ram’s-horn trumpets in front of the ark. But on the seventh day, march around the city seven times, while the priests blow the trumpets. 5 When there is a prolonged blast of the horn and you hear its sound, have all the people give a mighty shout. Then the city wall will collapse, and the people will advance, each man straight ahead.”

When a great commander like Joshua saw the fortified city of Jericho, his first thoughts must have been about creating siege engines and other weapons of war to penetrate the walls of his enemy. Surely marching around the city for seven days would achieve nothing. Instead of relying on his military experience and knowledge of war, Joshua chose to put his faith in God. This faith in God brought victory to the Israelites even though the tactics seemed counter-intuitive.

Jesus says in Mark 8:36: “For what will it profit a man if he gains the whole world, and loses his own soul?” If we are not fully putting our faith in God and using our abilities to serve Him, then we are not living live to its fullest. You may earn worldly victories in life by simply using your abilities, but you can earn heavenly victories when you trust the Lord and use your skills to serve Him.

As this New Year begins, ask the Lord to help make you like Joshua. A strong Christian of faith who uses his/her abilities to serve Him.